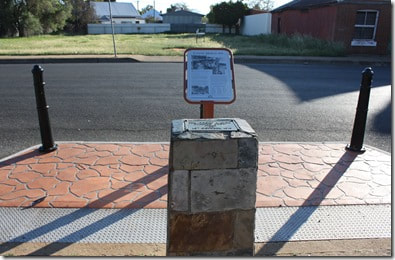 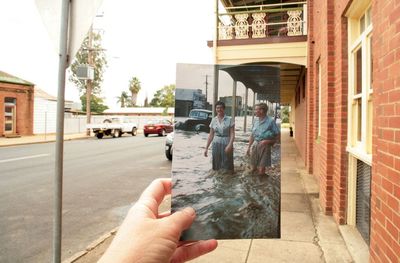 The Royal Hotel started life in1892 & was originally known as the Bridge Hotel. From the start it has always been the main & most substantial Hotel in Gilgandra. Its initial name was due to the fact that the Hotel was close to the first bridge crossing the Castlereagh river - plus it is located in Bridge Street which is the street running along the southern side of the Hotel. It was also in this street, & close to the Hotel, where the famous Coo-ee March from Gilgandra to Sydney started.  This March was solely for the purpose of enlisting WW1 soldiers from towns as it proceeded.

The Hotel was originally a single storey building & was made of pise (mud bricks) – with soil coming from a pit in the Hotel’s backyard. This was later filled with sand from the river. At this stage the Hotel was built with a high peaked corrugated iron roof. It also had a large windmill in the backyard for water, as did most substantial dwellings in the town at that time. The town actually started its early history being known as the town of windmills.

It was in 1904 that the second storey was added, along with verandas & wrought-iron balconies.  It was with this extension that the Hotel became such a prominent feature of the town & of the main street. The name for the Hotel was now changed to the Royal Hotel after these extensions were completed. The Hotel then started providing accommodation & meals to travellers - which is still very much a main part of the Hotels business today.

In the 1955 flood the Hotel was badly damaged. A plaque, located near the front door on the outside wall, shows the height the flood water reached. It was after this great flood damage that the Hotel was extensively renovated & remodelled. A new front was created & the exterior walls were replaced by brick. Photos in the Dining Room show the flood water & damage caused to the Hotel.​

The famous Hotel grape vine, over the beer garden, is believed to have been planted in the early 1900’s as it was reported to be well established when the 1904 extensions were done. This grape vine is a prominent feature of the Hotel today & remains healthy & strong. It still bares grapes each year & provides great cool, summer shade.

Following the disaster of Gallipoli and the heavy casualties in France in the latter half of 1915, recruiting figures for enlistment in WW1 had dwindled.  Numerous recruiting rallies became increasingly ineffective.  It was at this dark hour that Gilgandra’s butcher R.G. Hitchen and his brother Bill, the local plumber, had the idea of organising a route march of volunteers to Sydney, enlisting recruits as they marched.
The idea caught the imagination of the public, and the Coo-ees (as the volunteers were known) became national heroes.”
35 men left Gilgandra just across the road from The Royal Hotel and the number grew to 263 by the time they reached Sydney.  This action was responsible for a dramatic upturn in recruitment numbers.